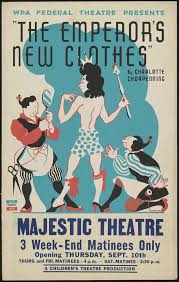 The course material refers to a number of examples where artists use their mistakes to make art, sometimes using verbose explanations to explain their intentions and justify the work. I am asked to reflect on artists’ mistakes and make the case for and against ‘The Emperor’s New Clothes’ argument. The course material is framed mostly in terms of photographic technical errors (eg overexposure or accidental exposure of photographic paper) and I didn’t immediately appreciate that it can refer to any error throughout the making process.

Before looking at the pros and cons, I put my hand up to thinking I don’t believe it is that important what an artist says about their intention. Intentionalism is only one aspect of how one finds meaning in a work. I suggest that it is over-emphasised, perhaps because it is the default mode of much journalism on photography – I rarely read a critical perspective in the BJP for example. Terry Barrett writes about this in his book Criticizing Photographs . An artist’s intention is only one interpretive strategy and only a part of how meaning is found. For example a work could be interpreted through a feminist or a marxist lens. Some artist may not offer explanations of the intention behind their work, either out of choice or because they recognise subconsciousness comes into play – there can be no yarn of The Emperor’s Clothes if there are no words.

I start by considering two examples picked during a scan through of BJP.

The Handbook of the Spontaneous Other is a work by Aikaterini Gegisian (https://gegisian.com/portfolio/handbook-of-the-spontaneous-other-2019/), who was interviewed in the April 2020 issue of BJP by Diane Smyth. Arguably the broken images made into collages are as much as mistake as David Bate’s deliberately broken and carefully photographed crockery in Bungled Memories that is referenced in the course material. What is interesting is the apparently contradictory intensions of the artist. Gegisian says the book attempts to stem the consumption of the other and is ‘a figure of resistance against this commodification of pleasure’. However, she also says that it should be taken with a ‘pinch of salt’ and as a ‘mechanism’ to say it is acceptable to enjoy looking at the images. To me, this is incoherent and conspires to make the viewer an ‘Emperor’.

I skimmed through a number of BJP back issues, with little sign of reference to mistakes informing work. Much of the featured work is about serious social narratives and represented with more or less straight photography. However, the critically acclaimed photographic artist Garry Fabian Millier is featured in the November 2019 issue of BJP. He works experimentally without a camera using Cibachrome exposures (down to his last 100 sheets of the discontinued paper). It seems to me that working experimentally as a modus operandi is akin to continually working with mistakes. One person’s experiment is another’s mistake? His work is based on abstract representations of Dartmoor and his experiences while walking it. He has continually experimented with his materials to discover different ways of making marks. However, listening to him speak (interviews are on his website) there is no pretence about what his work means, it is simply an emotional response.

Alec Soth is mentioned in the course material and, being a photographer I enjoy, I explore the Photoworks project referenced. Alec Soth is interviewed by Martin Parr and this tells the story of how the work came about (https://daylightbooks.org/blogs/multimedia/16937645-brighton-photo-biennial-daylight-multimedia-alec-soth-martin-parr-podcast). To cut a long story short, Soth was invited on a two week commission to photograph during the 2010 Brighton Biennial. He didn’t apply for a working visa and was told by customs authorities he wasn’t allowed to work while visiting the UK – reasonable, though it is framed as a problem with bureaucracy, rather than Soth’s lack of understanding of visa requirements for most any country. This was the ‘mistake’ in his process. To recover, he used his 7 year old daughter to make the photographs, with some suggestions and encouragement from himself. Alec Soth also edited a selection from the 2000 photos.

That a 7 year-old would offer a refreshing perspective on any place is probably not a surprise to any parent who has handed a child a camera (my own children were the same). What is more interesting is some of the angered responses to the work on forums. One example is the aPhotoeditor website (https://aphotoeditor.com/2010/09/23/7-year-old-exhibits-her-work-at-photo-biennial/). The general thrust of the arguments against is that no other 7 year old would have been allowed to enter the Biennial and was only allowed because Soth’s work is canonical. This is like the Emperor – most would not mention his nakedness because he is held sacred. While there is truth in this, another truth is that Soth’s visit had been paid for, he was billed on the Biennial and the organisers needed to recover costs – it seems like a creative work around when faced with economic realities. Also, it is not just any random 7 year-old, it is a 7 year-old working in collaboration with a famous photographer; that adds to the story and interest. What is fascinating about the analogy here is that the child is conspiring with the Emperor’s nakedness, rather than calling it out!

Rather than clothed or naked, I like to think of the analogy in terms of subtler states of undress. I perceive very few things as binary as there are often complex, alternative perspectives at play. At one extreme the viewer is fed contradictory gobbledegook to justify and explain work, at the other an honest explanation of a mistake and the creative work around. I listen to the artist, if they share thoughts, and make up my own mind in context.

The course material asks if there is anything I feel compelled to do but cannot see a way to incorporate it into my project. It also asks whether I would be comfortable using opportunistic encounters in my work.

I would like to incorporate portraits into the work – they rely on chance encounters along the sparsely peopled canal and so far, I’ve had few opportunities. With the current direction of work focusing on alternative perspectives on space, location or activities would also be important. I also would need landscape orientation to fit with my picture-in-picture presentation that I’ve become keen on. So far I have a few portraits from the canal but have not yet used them. The question reminds me that I should redouble efforts in this area!

I’m comfortable using opportunistic encounters as I’ve done a lot of street photography in the past.