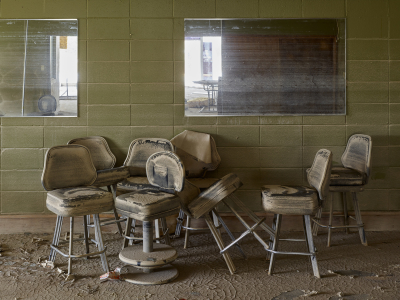 In the April 2019 issue of BJP, I read with interest Mark Power’s reflections on photographing on the streets as he travels across the USA . Some of his observations seem to serve as good advice to me as I begin my photographic journey.

Like other photographers, he emphasises the importance of printing work to get a sense of a project’s progress and guard against making the same pictures over again (ibid, p39). For my own practice, I intend to start making small prints of the work I think is of value so I can easily experiment with sequencing in the space I have available (and conserve paper).

There are some interesting comments on Power’s approach to working on the street. He says that he prefers to walk as ‘pictures collected on foot are naturally more subtle’ (ibid, p39), so rather than describe his project as a road trip, he prefers to call it ‘a series of urban hikes’. I’ve been thinking about the approach to the canal and the large stretches of emptiness between the towns it joins up. To capture the portrait element to the work, I think I will need to divert from the canal path into the surrounding urban areas (where there are more people). So the idea of attaching a ‘series of urban hikes’ to the canal route would be a good way of describing the approach.

Discovering where [the] journey leads is probably the whole point of the trip. As Danish philosopher Søren Kierkegaard famously said: “Life can only be understood backwards; but it must be lived forwards”.

In the OCA course material we are advised not to be in too much of a hurry to fix our projects in a particular direction, but to let them unfold. Kierkegaard’s aphorism is a nice way to remember!